It is important to understand that arsenic cannot be destroyed in the environment. It can only change its form. Most inorganic and organic arsenic compounds are white or colorless powders that do not evaporate, but can be attached to tiny particles that will inevitably become airborne.

When airborne particles are tiny enough, they can stay suspended by air currents for days and travel many thousands of miles from their original point of origin.

These particles will eventually hit the ground courtesy of gravity or precipitation (rain, snow etc…). Many common arsenic compounds can easily dissolve in water, so arsenic can get into lakes and rivers, and is not only found in groundwater.

Many groundwater sources in Utah have dangerously high levels of Arsenic. Several types of cancer have been linked to arsenic in water. In addition, arsenic has been reported to affect the vascular system in people and has been associated with the development of diabetes. 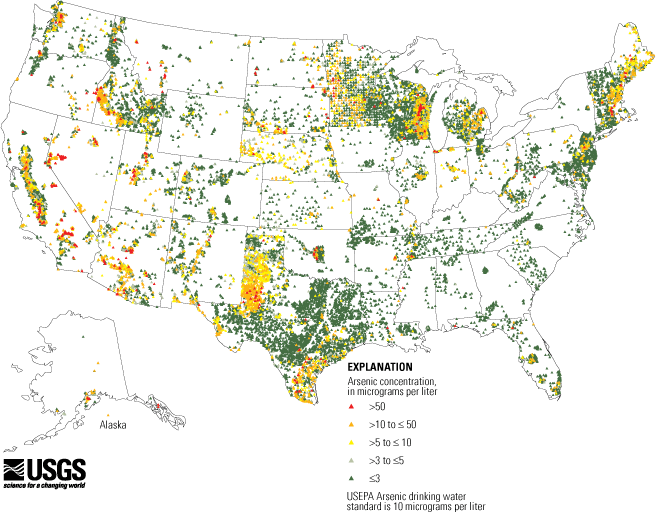 Both inorganic and organic arsenic compounds are metabolized by the human body to varying degrees and some will be excreted in urine. Most organic arsenic is expelled and a large amount of inorganic will leave the body after a few weeks, but some of that arsenic will remain indefinitely. An elevated level of arsenic is believed to interfere with cellular metabolism. Arsenic poisoning produces gastroenteritis, esophageal pain, vomiting and violent diarrhea. Eventually the skin becomes cold and clammy, blood pressure drops and overall body weakness sets in. Death from circulatory failure is sweet release from the convulsions. Large doses of arsenic insufficient to kill will cause restlessness, nausea, vomiting, headaches, dizziness, chills, cramps, irritability and variable levels of paralysis and neuropathy that may progress over several weeks. Even at extremely low levels, arsenic consumption has recently been linked to the development of diabetes, oxidative stress, DNA damage, skin damage and immune system malfunction in susceptible persons.

The Department of Health and Human Services (DHHS), The International Agency for Research on Cancer (IARC) and US EPA have classified arsenic as a human carcinogen.

Chronic exposure to even low arsenic levels (less than 0.05 mg/L) has been linked to health complications, including cancer of the skin, kidney, lung and bladder, as well as other diseases of the skin, neurological and cardiovascular system. Skin absorption of arsenic is negligible; therefore, hand washing and bathing do not currently pose a known risk to human or animal health.

There are seven common arsenic species that can be encountered in Utah’s water:

Arsenic is one of the hardest ions to remove from water. It has a high molecular weight and there are many factors that will impact its removal from water. One of the main factors is that phosphate ions are very similar to arsenic ions, and compete for exchange sites. If the feed water has high levels of phosphate, the capacity for arsenic removal will be much lower. Another factor that will affect the ability to remove arsenic from water is the feed pH. It is best to maintain close to neutral pH (~7 pH) for arsenic removal applications. At lower pH levels, arsenic can become insoluble and lose its ionic charge. The levels of natural arsenic in water will vary from area to area with the highest levels in areas with very deep wells.

Crusader Arsenic removal systems are engineered to work in single-tank or lead/lag configurations.

This kind of filtration system should only be installed after a comprehensive water test and engineering evaluation.

To talk to a local water expert, give us a call